How I Met Your Mother Quiz. Just Real Fans Can Score +80%

The definitive How I Met Your Mother quiz is here. Can you accurately respond to each of the HIMYM trivia questions? It is really difficult; only true fans can achieve 80%!

Do you have complete knowledge of HIMYM? That, We Doubt!

Thanks to Netflix, the sitcom How I Met Your Mother continues to be popular. How much do you actually know about this show, though? Are you a regular viewer or a true devotee? To demonstrate this, we built the most difficult HIMYM trivia quiz in the world.

In contrast to other exams, like the one we made for The Office, your personality is irrelevant in this one. Therefore, it won’t be a character match issue at all. Pure show knowledge is the only thing we are looking for here.

By the way, based on your accurate responses, you will receive a score between 0 and 20. If your score is less than 15, you failed the trivia test. (So, please, no resentment.)

Take the Most Difficult Trivia Test Ever.

Twenty trivia questions covering various elements of How I Met Your Mother make up the test. The reason it is referred to as the “hardest” is because we made an effort to learn even the tiniest information of the program you have probably never heard of.

Our Hardest Friends Test is also highly recommended if you enjoy thrilling trivia quizzes. Just like the one on this page, it would demonstrate if you are a true admirer or not.

Test Your Knowledge of How I Met Your Mother

We separated the questions into three main categories—plot, characters, and timeline—to increase their variety. Everything you need to know about each part is provided here.

The plot of HIMYM is full of highs and lows. However, only true fans will be able to recall every every detail. Therefore, this readily forgotten information will be covered in the first section of the trivia test.

Please be aware that there are big spoilers in the How I Met Your Mother quiz. So be forewarned. Additionally, we doubt that you could ever pass the test without having seen every episode.

The gang is the topic of the second question in the HIMYM trivia quiz! How much knowledge do you have of Ted, Robin, Marshall, Barney, Lily, and Tracy, the six main characters of the show? Not a lot? If so, skipping the test might be preferable. Only true fans would be able to remember the smallest nuances in the character questions.

What time did THAT occur? The chronological relationships between the events will be covered in the third and final section of the How I Met Your Mother Trivia. For instance, when did Tracy (The Mothername )’s appear in the show? Was that before or after we met the gang?

Meaning of Your HIMYM Trivia Score

Your level of fandom is revealed by the test’s overall right response percentage. The How I Met Your Mother Trivia was created so that the majority of inexperienced fans would fail. (Sorry). Therefore, you become a better fan as you advance. Your score has the following meaning.

You have seen a few seasons of the program. However, that does not make you a die-hard supporter. The trivia test’s first 10 questions are not even that difficult. Therefore, a score of less than 10 indicates a lack of HIMYM knowledge. Going to the official fandom page and carefully studying the story and characters is one approach to get better. (However, why on earth would you ever want to do that?

A positive sign on the How I Met Your Mother quiz is getting a score of at least eleven. It shows that you are not a typical fan. You are familiar with the story’s characters, major events, and overall timetable. However, it still isn’t sufficient to pass the test. You require at least sixteen accurate responses. Anything less is considered a failure. But don’t worry, you may repeat the test whenever you like. So perhaps next time?

Less than 15% of players are able to get a HIMYM trivia score of eighteen or above. That merely demonstrated your status as a die-hard admirer. It’s impressive how much information you know about the program. And there aren’t many individuals as knowledgeable as you. You are what we’d term a “How I Met Your Mother Expert.” Still, that wouldn’t make the perfect fan. But you’re getting pretty close to being one.

Congratulations! You become an ultimate fan if you receive a score of nineteen or twenty on the How I Met Your Mother Trivia. Only 5% of individuals are able to achieve the same outcomes. It appears as though you are an expert on the program. You may post your accomplishments with pride on social media and challenge your friends to outperform you. (Though we doubt they could.)

Before the How I Met Your Mother Quiz, warm up

It would be a good idea to prepare beforehand because the questions will be challenging. Here are a few instances of trivia you can use to gauge how current your knowledge is. If you couldn’t respond to these questions, you should skip the quiz altogether because you would have failed it as well.

In the first season, Lily left Marshall behind and moved to which city?

Lily was detained over Thanksgiving because (fill in the blank).

How does Barney refer to the woman with whom he lost his virginity?

Here are the right responses.

San Francisco is A1.

A2: Urinating in public

What Is So Special About the HIMYM Trivia Game?

In 2021, we developed the quiz for How I Met Your Mother. It is therefore the most current test you may take. The majority of other trivia tests are rotten and out of date. So if all you want is a fresh, difficult test, you’d be on the correct track.

None of the pictures on the How I Met Your Mother trivia quiz are owned by QuizExpo. All of these images are Netflix property. 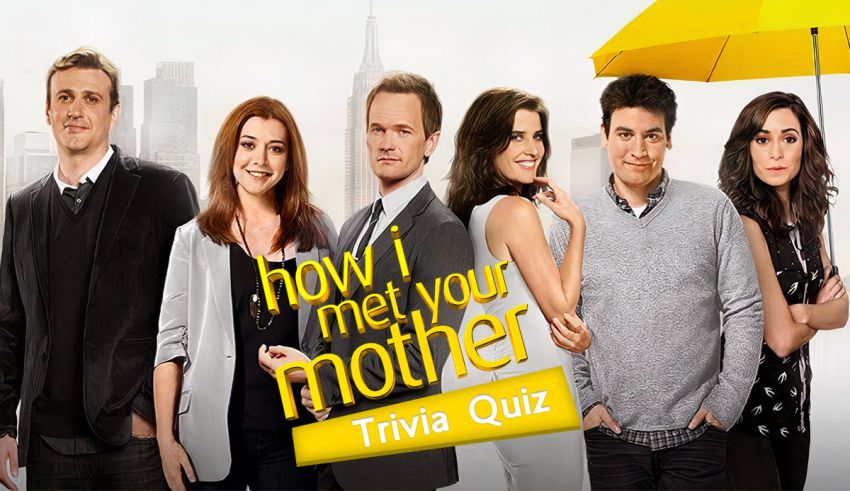