Quiz: Which Eternal Are You? 2022 Marvel Universe Quiz

What kind of Eternal are you, really? You may find out if you are Ikaris, Thena, Gilgamesh, Phastos, or someone else by taking this quiz on the Marvel Cinematic Universe. In fact, you might even be a Deviant!

You’re an Eternal, right? Which One, then?

Marvel fans who have seen the film might wonder, “Which Eternal is comparable to me? The good news is that we wrote an entire test just for that purpose. It’s not like our Amazing Marvel Quiz where you have to guess the right response. But we’ll be able to tell which immortal superhuman best suits your character based on your comments.

All the recognizable Eternals have been given detailed profiles by us. Your traits will be compared to those of Marvel’s superhumans to see which one you most closely resemble in real life. We ask questions that are connected to the events of the movie and comics, unlike other online examinations. The outcomes are therefore more dependable and enjoyable.

Know your MCU talents and abilities.

One benefit of taking the Eternals character quiz is that you will obtain thorough findings that explain your special abilities. You learn what superpowers you might have possessed if you were an eternal hero.

Find out which Eternal might be your best pal.

Typical fan questions include “Which MCU hero are you?” However, we wanted to make a test that does more than just respond to that. In order to identify your Eternal bestie based on your personality, our editors added a section to the whole affair. By the way, no other quiz can currently achieve that.

Find out more about your personality for free using your Eternals character.

What does it mean to be the same eternal superhero as someone else? What about you does your Eternals character reveal? The test findings provide more information on these issues. We provide each participant with an informative and fun persona breakdown that explains why they resemble a specific superhero and what it signifies.

Are You a Deviant or a Homo Immortalis?

It is possible to match villains on the Eternals quiz. You have an equal chance of ending up as a hero or an antagonist because we included some of the Deviants’ profiles in the findings. Marvel fans are unlikely to respond, “I’m a Deviant,” when you ask them which Eternal they identify with. However, if you have any dark aspects, our quiz can reveal them. So, be aware.

Without a test, how can you determine which eternal you are?

Finding your Eternal match may be aided by reading character descriptions. It’s not a precise procedure, though. The personality profiles of four well-known superheroes who could be your MCU counterparts are shown below.

She makes a great leader and a natural warrior. Despite everything that has happened to her, Thena is a composed Eternal. Her leadership and thoughts are relied upon by other immortals. And she makes every effort not to disappoint them. Although Thena is typically calm and at ease, she battles negative emotions on the inside. She is greatly affected by the dangers posed to her loved ones. She is unable to communicate the majority of her concerns because of her friends.

As a humanitarian, Sersi has always made an effort to aid humanity. She is compassionate, giving, and forgiving. She doesn’t retain grudges no matter what, as all Eternals are aware. She is now one of the cutest superheroes in the entire Marvel Cinematic Universe as a result of this. Many admirers would choose Seris if you asked them “Which Eternal are you?” because of her excellent superpowers and caring personality.

One of the most well-liked Eternals is him. Strong and physically unbeatable, Gilgamesh is. But that’s not the sole factor in his popularity. His warm and amiable demeanor is one of the reasons why fans adore him. Everyone wants a friend like him. No matter what, Gilgamesh is always there for his pals. And no matter the tasks or difficulties, he never declines to help people.

Despite having a mind of his own, Phastos is a likeable character. His devotion to his family is endearing. We all want him to have a happily ever after type of existence. Matching Phastos suggests that you value your family above everything else and are a family-oriented person. If it were feasible, you would build an indestructible for your family to shield them from the outside world, just like Phastos did for his son and husband.

The MCU features a ton of compelling characters. You just read one of them’s description. So, if none of them reminded you of yourself, don’t worry. There may be someone out there who is your match. By taking the quiz, you would be able to quickly and easily get the answer to the question, “Which Eternal am I?”

None of the images used in the “Which Eternal Are You Quiz” are owned by QuizExpo. All of these images are owned by Marvel. 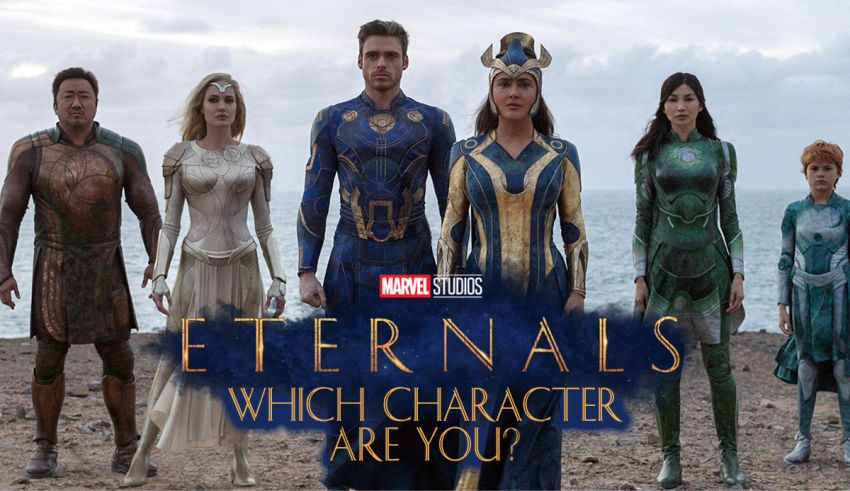