LOTR Quiz: Which Lord of the Rings Character Are You?

Do you ever wonder what character from The Lord of the Rings you are? Take this Middle-Earth quiz in the style of Tolkien to find out if you are Frodo, Samwise, Gandalf, Aragorn, or someone else.

A LOTR quiz to determine your true personality

The test consists of 20 personality questions that will pair you with one of the key characters from The Lord of the Rings.

The test’s underlying idea is comparable to that of the Dune Character Quiz. You respond to a few psychological inquiries that help you understand who you really are. The quiz then employs the data to identify your ideal partner in the Middle-Earth realm.

Here is all you discover from the findings:

Find out which character from The Lord of the Rings you are.

Find out which of the more than 900 characters from The Lord of the Rings is most like you. The questionnaire examines your character qualities, values, and even your choices to make that happen.

Learn about the opportunity to carry the Ring.

Can you support wearing a Power Ring? Would you possess the mental fortitude to resist the temptations? You can learn that through the test. We look for clues and warning indicators to spot those who might have been duped by malicious voices in their heads.

Find out if you are a member of the Fellowship of the Ring.

The LOTR quiz features both antagonists and heroes. Therefore, rather than the members of the Fellowship of the Ring, you might match one of the wicked characters. The outcomes entirely depend on your actions and choices.

A specific Lord of the Rings character should be implied by a match. Because of this, we included a thorough personality profile with the results that explains why you were matched.

How Can I Tell Which Lord of the Rings Character I Am Without a Quiz?

Taking a legitimate online exam like the one on this page is the most accurate way to find your counterpart. Some Ringers, meanwhile, might not be motivated or have the time to take it. Another option for these fans is to study the character descriptions and choose the one that most closely resembles them.

Frodo, who plays the main character in the films, is a generous, brave, and kind person. Despite being quiet and reserved, his curiosity takes him on many unexpected adventures. Frodo is also quite intelligent, making the right choices even in the most stressful circumstances. Despite being drawn to its power by his innocent and generous nature, he manages to shatter the Ring and save everyone’s lives.

In the Lord of the Rings Character Quiz, Frodo-like individuals are kind, courteous, and polite. And they typically follow the rules without question.

Sam really is a friend. He demonstrates that he is the Ring fellowship member who is most dependable. Additionally, he succeeds in saving Frodo’s life by assisting him in destroying the Power Ring. You may also see Sam’s protective side in the movies and the original literature. He won’t think twice about giving his life to save those he cares about. He is humble and kind because he prioritizes the needs of others over his own.

You are a charming, gregarious, and amiable person if Samwise from The Lord of the Rings is your Lord of the Rings persona. You enjoy spending time with individuals you like and finding new friends is simple for you.

He is without a doubt the most courageous fighter that Middle-Earth has ever seen. Aragorn is a wise, cunning, and brave monarch who makes a superb leader. Due to his horrific past and uncertain future, he is also a depressing and dreary guy. Aragorn is a brilliant healer, aiding those in need like a heavenly angel in spite of all of that.

Which Lord of the Rings character are you, you can ask Ringers? “I’m Aragorn,” many would claim. That’s because, as a result of his illustrious personality, he is one of the most well-known guys in the stories.

Matching him on the test shows you have leadership potential. Additionally, it implies that you have confidence in your abilities and are a great motivator of yourself.

Gandalf is a lighthearted character despite his age. He catches people off guard with his unanticipated bluntness. And he’s said to be easily irritated. However, he has a lot of patience and serves as a guru and teacher who can be trusted. You are more mature than your age if you have a personality like Gandalf. It also suggests that you have a short fuse.

The most common response among Girl Ringers to the question “Which Lord of the Ring character are you?” is “I’m Galadriel.” She is a kind mother figure who demonstrates much pity for the creatures of Middle-earth. Galadriel, the most attractive woman in the LOTR realm, is also haughty and charismatic. She genuinely believes in the power of love and does her hardest to act morally upright at all times.

Galadriel would describe you as a kind, likeable, and charming person.

Other Lord of the Rings characters

There are numerous characters in Tolkien’s world that are worth analyzing. However, you only read about five of them in detail. Taking the quiz is your best option if you want to boost your chances of finding your ideal partner. We developed a library of personality profiles from The Lord of the Rings to compare with yours and provide fast feedback.

None of the pictures used in the “Which Lord of the Rings Character Are You Quiz” are owned by QuizExpo. All the aforementioned films are owned by New Line Cinema, WingNut Films, and Middle-earth Enterprises. 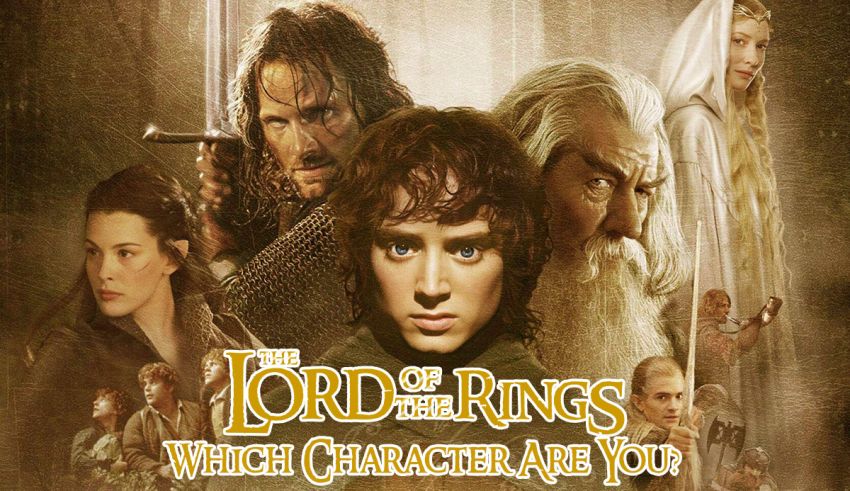