Do I Have an Eating Disorder? This 100% Accurate Quiz Reveals

Do I have an eating disorder, you may be asking yourself. Find out if you have any physiological conditions related to eating by taking our validated Anorexia & Bulimia questionnaire.

How to Recognize an Eating Disorder in Yourself

If your BMI is 18.5 or less, you purge after eating, or you eat too much in one sitting, you DO have an eating disorder. Fasting, skipping meals, smoking, throwing up, or using laxatives to manage your weight are other indicators of having such a mental disorder.

A 4-in-1 Test for Eating Disorders

If you want to find out if you have anorexia, bulimia, or binge-eating disorder, take the self-report quiz on this page. It looks for any mental diseases connected to body or food obsessions using the DSM-5 guidelines. The three main ED subtypes are represented in the results, along with BDD problems.

What Does the Examination Disclose?

By taking the test, you discover the following details.

The potential for anorexia nervosa

Anorexia is characterized by a restricted or avoidant eating pattern that results in rapid weight loss and a low BMI. A person with this disease is frequently consumed by the need to lose weight. It is also regarded as the most fatal mental condition associated with food. This is owing to the possibility that the patient’s underweight may cause death.

Note that the aforementioned condition is not the same as finicky eating.

The likelihood of having bulimia is also revealed by the eating disorder quiz. With this illness, the patient makes an effort to burn off the extra calories they consumed. However, a person with this disorder employs unsafe tactics to do so, such as forcing themselves to vomit, taking drugs, or engaging in dangerous exercise.

The probability of suffering from a binge-eating disorder

It is characterized by the DSM-5 as considerable food consumption during times of stress, disgust, guilt, or other strong emotions. However, there are no purging or other unusual weight loss methods associated with this illness.

How severe Body Dysmorphic Disorder is

An ED may occasionally cause BDD. It is the condition of being fixated on your physical faults, real or imagined. BDD sufferers may overgroom, undergo cosmetic surgery, experience anxiety and depression, and withdraw from social situations.

There are several indicators that make people wonder, “Do I have an eating disorder?” The list of symptoms that you should not overlook is provided below.

The Eating Disorder Quiz: Things to Know Before Taking It

There are several myths around the subject.

#1: Being thin is not the only goal of anorexia.

Some people believe that people limit their food intake to improve their appearance. But not every patient is like that. Religious or even attempts tied to sexual abuse are examples of other types of anorexia. And the person may fast to make oneself appear even more repulsive.

Food disorders are not just more prevalent in women, despite this. Studies indicate that this issue affects around 10 million men. A growing number of males are also asking themselves, “Do I have an eating disorder?”

One to two percent of Americans have anorexia. It is regarded as one of the most fatal mental diseases. This is owing to the possibility that the person may actually pass away from malnutrition.

Why some people deal with ARFID or other analogous conditions is not entirely apparent. However, it has been demonstrated that the following elements have a significant impact on a person’s eating patterns and diet.

Your personality and habits are shaped by your environment. For example, experiencing traumas or social hardship may have a detrimental impact on how you perceive your body and result in a mental disease.

It is thought that children who have eating disorders in their parents are more prone to experience these problems themselves.

Some people find that eating helps them produce more dopamine. So, it develops into a habit akin to addiction. When faced with a stressful environment, this habit is the main cause of binge eating.

How Can You Benefit from the Eating Disorder Test?

Your stress level may increase if you wonder things like, “Which eating disorder do I have?” or similar things. You can better grasp your position by taking a test. Additionally, it might make concealed problems apparent that demand immediate attention. You can talk about the results with a dietitian or a licensed physician after taking the questionnaire.

The DSM-5 recommendations form the basis of the Eating Disorder Quiz. It does not, however, give you a diagnosis. Only a medical practitioner, psychologist, or professional nutritionist is qualified to make such a diagnosis.

For more personality quizzes check this: Am I Addicted To My Phone Quiz. 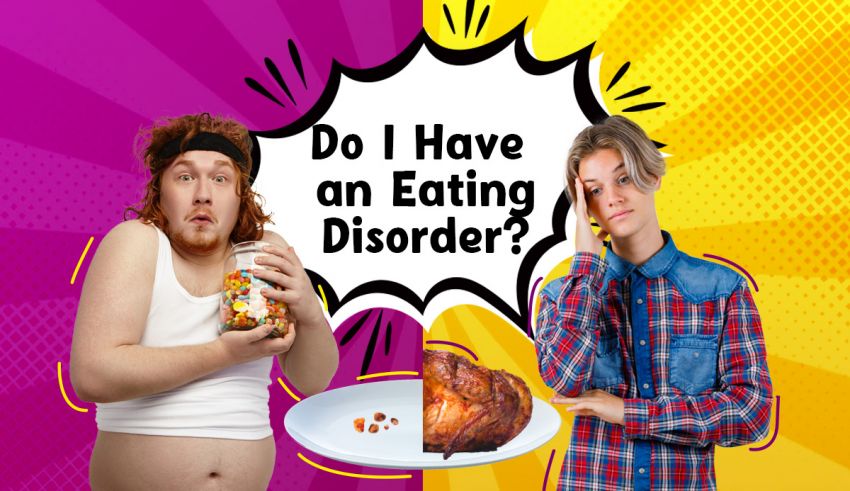