This Sherlock quiz will be difficult for you if you are a true fan of the TV program. 15 out of 20 trivia questions can you correctly answer? Let’s begin.

What is Sherlock Quiz

All Sherlock lovers from around the world are invited. We appreciate you taking the time to read about our Sherlock Quiz, which consists of 20 questions about one of the greatest television shows ever. You could assume that this test will be simple. No sir. It will turn into a nightmare for you. Therefore, if you are up for the task, you may test your knowledge of one of the smartest characters in TV show history here. Moreover, sharing incredible adventures with Dr. Watson, his dearest and most dependable companion.

Let’s take a broad look at this gorgeous and lovely show before we get to the Sherlock Quiz.

A little Introduction to the series

British television program Sherlock debuted in 2010. Martin Freeman and Benedict Cumberbatch are the actors that portray Sherlock and Dr. Watson, the two main protagonists. These two benefited greatly from the series, which helped them become well-known and affluent. in particular Benedict Cumberbatch, who was given the opportunity to play in Doctor Strange years later.

Three episodes per season have been produced for the first four seasons, which is somewhat unusual. Even still, there are lots of admirers of the show. The fantastic character Sherlock, who possesses a bright mind unlike any other person, is largely responsible for the show’s renown. Because of this, he is frequently referred to as a maniac or an alien. It is especially adored for the outstanding performances by the cast. They did a fantastic job and were true to their character. They cannot be replaced.

Adapted from the original book and plot, Sherlock has appeared in a number of television shows and motion pictures. This narrative differs in that it is set in the contemporary era. The other types, however, were more prevalent in the past, almost before the development of the automobile.

In the majority of the episodes, Sherlock and his partner work to solve crimes. Each season’s purpose and subject are specific to that season. The following section will delve deeper into the narrative.

What is the story?

The plot gets underway quite quickly. Dr. Watson is a former soldier who struggles with his faith. He still has combat wounds and needs a stick to walk. It was eventually discovered that it was unrelated to the wound. He runs into an old friend one day and mentions his search for a rental home. He meets Sherlock, his future companion, in this way.

Sherlock was a kind of investigator who occasionally assisted the police. Because of his odd attitudes, no one would want to share a room with him. He therefore leases a home with Dr. Watson.

As previously said, every episode has a primary antagonist. However, it features a master villain in the majority of the seasons. a person who embodies the wicked, antithesis of Sherlock.

What distinguishes Sherlock from other programs of a similar nature, you might wonder? The method used to solve crimes contains the solution. Sherlock possesses a special talent. He might be able to tell where you were yesterday, what you did there, and what you ate, for instance. The thrilling aspect is that he merely gives you a brief glance while accomplishing all of it.

The key factor behind why so many people adore this series is This Behavior. You become enthralled by his mental processes. Furthermore, nobody can portray intelligence as convincingly as Benedict Cumberbatch. He is amazing in the part.

Anyone who has seen Sherlock has at least once attempted to think like him, which is a delightful truth. To learn more about someone, they obnoxiously gaze at them. But without a doubt, everyone who tried failed. The things Sherlock accomplishes are essentially impossible. Don’t try to accomplish it, then.

Sherlock has a lot of peculiar habits. People assume he is the murderer in some cases due to this plus his brilliant mind. Now you might find this a little strange. But suppose you come across a man who can solve the case with a single glance at the crime scene. What do you believe?

Every season has a great and unexpected conclusion. For instance, it is impossible to see season one come to a close without wanting to know what comes next. Additionally, the show keeps you shocked right up until the very end. Even if the most recent season did have a few minor problems, it was still enjoyable and had enough of wonderful humor.

You would assume from what was just said above that this show is only about solving crimes. You’re mistaken, though. This beautiful work of art contains a ton of information.

The remarkable bond between Sherlock and Dr. Watson comes first. They demonstrate what friendship really means. Anything would be done to save the other. Even the first season makes it clear. Never would they hurt or betray one another. They do occasionally argue, but hey, that’s what friends do.

Then, we witness Dr. Watson’s enduring love for a stunning and alluring woman. Despite the fact that they had a difficult relationship, they eventually had a great family.

Naturally, we can also see Sherlock’s own metamorphosis. From a ruthless being to a caring individual. Although he is still a little frigid, he is very considerate of others.

Sherlock and his brother have an odd relationship as well. They might even be deemed adversaries. But, at least in most situations, they do have a love for one another.

You should be interested in this amazing show after reading the material in this post. You might think about watching this fantastic series in your free time if you enjoy detective fiction or solving crimes with a police officer. You should invest the time and money. Remember to take part in our Sherlock quiz. Let’s move on to the challenging questions.

For more personality quizzes check this: Which Cartoon Mom Are You. 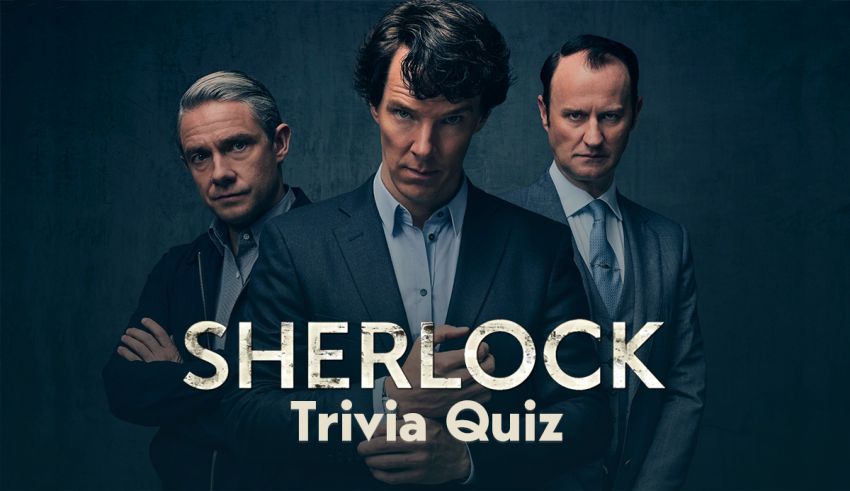