Which High School Musical Character Are You? 2021 Version

What High School Musical character are you, by the way? This 20-question test identifies whether you are a member of the original movie cast or a student from the 2019 series. Are you Nini, Ricky, Troy, Gabriella, or someone else?

2006’s The High School Musical was a popular Disney film. The current series, however, has given the franchise a completely fresh feel. Which character from the past or present of the program best describes your personality?

Similar to our other musical quiz, “Which Glee Character Are You?,” we developed a forced-choice test. It features twenty amusing questions that will reveal the kind of student you would be at East High School.

That is not all, though. Everything you learn from taking this quiz is detailed here.

Find out which character from High School Musical you are.

There are more than 15 main characters in all between the movie and the television show. So, finding your ideal partner might not be so simple. However, the HSM Quiz can help with that. You can immediately determine which of the aforementioned kids best describes you by responding to all twenty questions. The test can be finished in less than 5 minutes.

Your high school love has arrived.

Musicals inevitably feature love storylines. Ricky makes an effort to win Nini’s heart again while Troy has Gabriella. There will always be a romantic plot in a spin-off or film, regardless of what you may think. Because of this, we also wanted to add some glitz to the High School Musical Character Quiz.

You discover your potential love interest towards the end of the test if you were an East High School student.

Discover the title of your music.

There are several memorable performances and songs in the production. But which one best captures your spirit or character? The exam provides the answer to that query. The outcomes include a selection of HSM songs that poetically and artistically capture who you are.

What’s the process for the High School Musical quiz?

The test’s objective is to determine which HSM character most closely resembles you. It does this by utilizing four crucial components: your persona (obviously), your aptitudes, your friendship styles, and the music exam. For details, see the section below.

The High School Musical Quiz starts out with largely psychological questions. The goal is to ascertain your personality type before introducing your match.

Nearly every character in HSM has a talent, whether it is for acting, singing, or playing an instrument. In light of this, knowledge is important while answering questions like “Which High School Musical character are you? You don’t have to be a musician to take the test, of course. However, the outcomes are significantly influenced by your artistic persona.

#3: Pushing the boundaries of your friendships.

In both the original films and the new television series, friendships play a significant role in the plot. Therefore, it’s important to be aware of your relationship boundaries before choosing which HSM student you are. The test compares your attachment style to one of the characters from the show in order to evaluate it.

It is a musical quiz after all. Therefore, it would be absurd to suggest a High School Musical match without taking your musical preferences into account. You will be asked numerous questions that describe the kinds of songs you enjoy throughout the questionnaire. And that aids us in determining which student on the show is comparable to you.

Characters from the new series and the original HSM film should be compatible.

This test’s inclusion of all the important pupils is a plus. Troy, Gabriella, and Sharpy were yours thanks to the 2006 franchise. Additionally, you have Ricky, Nini, Gina, and even E.J. from the new teen squad.

Discovering whether your character has a more classic or modern vibe is fun.

In 2006, he was popular with all the high school girls. Troy was a courageous, sociable, and kind-hearted youngster who was also highly extroverted. Above all things, he valued his friends and family. Additionally, he appeared willing to forego his own wellbeing in order to protect his loved ones. He is competitive, fiery, and humble, according to his pals. However, given how simple it was to irritate him, some may argue that he is hypersensitive.

She was a tenacious, considerate, and compassionate individual. Gabriella is presented as a devoted, loyal, and smart student in the first three films. Her relationship with Troy had an impact on her personality, making her a more self-assured and compassionate young woman. She was also a gifted vocalist who instantly captivated everyone with her vocals.

She was first an adversary before becoming one of the franchise’s most adored protagonists. Sharpay has a bold, ambitious, and focused personality. She is the only pupil at her school who actually desires an acting career. She is cutthroat and a little bit selfish due to her ambitious objectives. Sharpay is a charming and nice HSM character overall, though.

Ricky is uneasy despite being one of the attractive students. He worries that he won’t be excellent at anything. But he is determined to win back his ex-girlfriend Nini despite this obstacle. His sarcastic demeanor is an effort to mask his vulnerabilities. He is a kind and lovable boy overall though.

She is the kind of student with whom every high school girl might instantly connect. Nini is uncertain about her life and struggling to choose the best course of action. She is held back by her interpersonal issues and her unresolved love affair with Ricky. However, she is adamant about pursuing her aspirations of becoming a musical sensation.

The photographs used in the “Which HSM Character Are You Test” are entirely owned by Disney, not QuizExpo.

For more personality quizzes check this: Which High School Musical Character Are You. 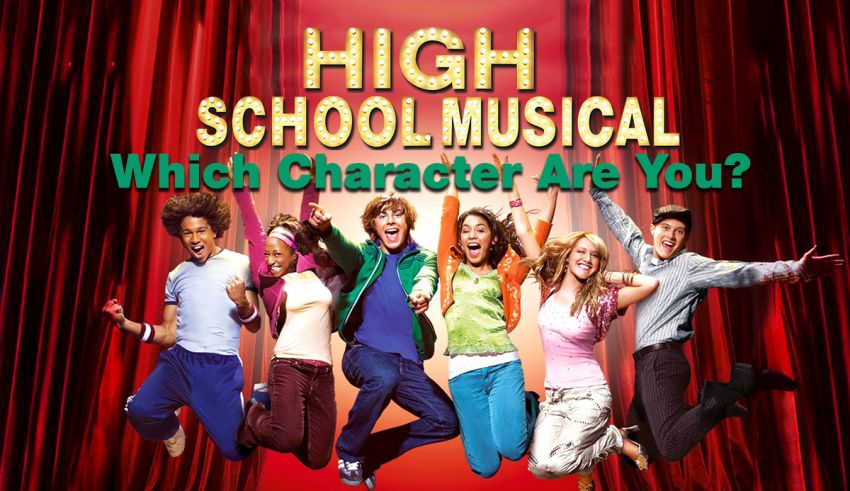