What Anime Stereotype Are You? 100% Fun Quiz

What kind of anime stereotype are you, huh? Ever pondered which anime cliche best suited your character and way of life? The solution is revealed through this otaku-level quiz.

What Is a Stereotype of Anime?

An overused trope or cliché is referred to as an anime stereotype. It has clichéd protagonists, stories, turns, and even abilities and enticements. For instance, tsundere (a character who treats their love interest horribly) is a stereotype since they appear frequently in anime and manga.

How to Pass the Anime Trope Test

Twenty questions regarding your actions, reactions, thinking process, and style make up the quiz. Your anime profile will be created and compared to our database of stereotypes. It provides the Japanese anime cliche that most closely resembles your character.

But don’t get it wrong. It is not intended to provide a response to the question, “Which anime character are you?” Only the formulaic notion or personality type that best fits your real-life persona will be revealed by the findings.

By taking an analytical test like ours, you may determine which cliché best matches your personality. But here’s what to do instead if it doesn’t appeal to you. To determine what anime show stereotype you represent, follow the four steps below.

Your anime stereotype may be determined by your behavior and personal characteristics. You must pay close attention to every aspect of your encounters with other people. Are you an exuberant talker, a diligent listener, an exceedingly introverted person, or an effusive party animal? When looking for your matched tropes, it is imperative to carefully consider these prominent qualities.

The key identifying characteristics of anime characters are their responses to various occurrences. Therefore, it’s crucial to understand how you’d react to certain situations. Are you obnoxious and excited, laid-back and cool, or tough and ready? Your responses to issues and circumstances in real life can give away your anime stereotype.

3. Analysis of appearance and fashion

Because of their distinctive aesthetic, anime characters may usually be identified by their appearance. However, there are some unspoken guidelines that hold true in reality regarding their appearance. For instance, mysterious figures frequently disguise certain features of their appearance—typically by donning a bandage or mask. Or bad guys frequently don long, dark garments that enable them to disappear in an instant. So, it’s imperative to examine your style while responding to queries such, “What is your anime stereotype?”

You’re accustomed to hearing the voice of your preferred anime character when you’re thinking. But what’s this? To identify your stereotype or cliché, you must pay close attention to your inner voice. What anime clichés best describe your life can be inferred from the way you think.

Which Anime Stereotypes or Tropes Exist?

Stereotypical concepts that are overused in the Japanese animation business might be listed on a very large list. But regardless of the show’s genre, these are the top seven tropes that you will see.

A persona, typically a female, will go to great lengths to conceal her affection for her infatuation. It appears in anime and manga so frequently that Tsundere became the word for it. You can already take a questionnaire to find out what your DERE is. However, Dere are archetypes for a variety of characters in Japanese animation, in case you were unaware. Tsundere is one of the ones that is overused.

The brat girl or guy who treats someone unfairly because they secretly adore them can be found in every genre. It has a tediously repeated sound. But it’s undeniable that it leaves a lot of potential for comic relief, particularly in darker or more serious episodes.

Many people might not even be aware that their eating habits fit the anime stereotype. But let’s be honest: Some people just make the strangest noises when eating. One of the troops’ traditions is this one. You start hearing those random yum yum and chomp chomp noises as soon as the protagonist(s) seated behind the table.

You cannot focus on finding anime clichés and ignore characters that simply misinterpret every scenario. Typically, it’s a shy girl who believes her crush despises her. And she chooses to blatantly misread everything her love interest does, believing he is displaying his animosity toward her. (It’s annoying to see those excruciatingly drawn-out moments where that misunderstood character makes mistakes in every aspect of their life.)

This is a good thing because many of you who wonder, “What anime stereotype am I?,” tend to fit it. The annoyingly pleasant girl trope frequently appears in anime and manga. It all revolves around portraying the tribulations and struggles of an innocent, timid, upbeat, and optimistic girl. And it frequently concludes with a brave love interest—most likely a very attractive boy—saving her from the cruelties of the outside world.

One of the most typical anime man cliches involves a boy accidently stumbling into a girl as she is getting dressed. That unfortunate character will become a pervert as a result of the encounter, which will lead to unimaginable difficulty in the future. However, the scenario can also take on various forms, such as accidentally tripping over a girl, touching someone inappropriately (again, unintentionally), or looking somewhere else than the hot girl’s eyes.

Most characters grant otaku access to their brains. Additionally, they can hear them thinking aloud. However, some of them have this stereotyped trait that makes those contemplative moments drag on for much too long. The overthinkers are the anime characters who begin overanalyzing even the most minute aspects, converting them into unfathomably complex ideas. This also occurs with extraordinarily clever characters that can overthink the entire creation of the universe and reverse engineer it.

Most likely, you are well aware of this anime cliché. But in reality, not many otakus broach this topic in relation to anime or manga. Popular shows now frequently feature overly sexualized characters to draw in new viewers and keep them interested. Everybody may recall at least one random “Beach Episode” in which every attractive person strips off for no apparent reason.

Unfortunately, there are some false stereotypes concerning fans of anime and otaku. anime is for kids, the majority of episodes promote perverse ideologies, or otakus are troublemakers. The saddest aspect, though, is that some other online quizzes use the same divisive and disrespectful concepts to construct tests about anime stereotypes.

However, we want you to be aware that the QuizExpo test on this page is otaku-friendly and completely courteous. We oppose all forms of discrimination. As a result, you can enjoy the anime trope survey without being concerned about the results.

None of the pictures used in the “What Anime Stereotype Are You Quiz” are the property of QuizExpo. No infringement of copyright is intended. If you own any and want them taken away, do get in touch with us. 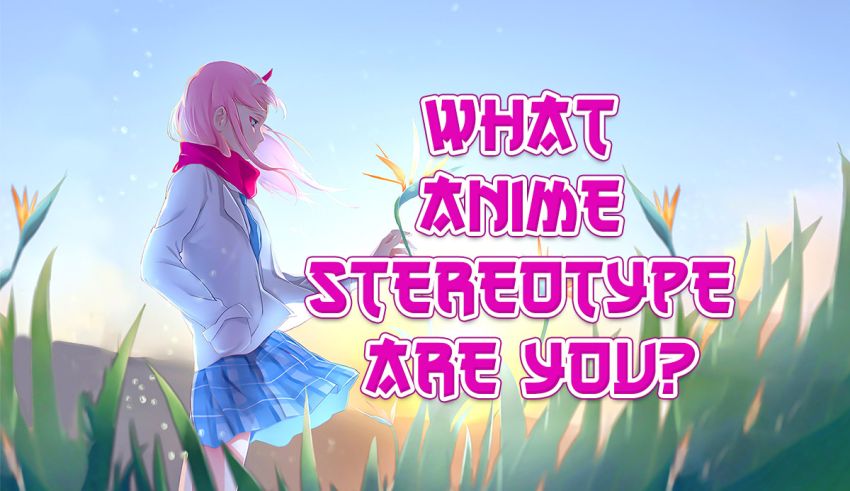