Quiz: Which Harry Styles Song Are You? 100% Accurate Match

Hey, what song by Harry Styles are you? This test matches one of his songs with your personality. Styles would be shocked by the 100 percent accurate results!

Which Harry Styles song are you? is a common icebreaker used by Harry’s (aka Styles) fans. An outsider would find this query odd. But true admirers of Hazza take it seriously. And for that reason, we built an entire quiz around it.

This quiz examines your personality and compares it to Harry’s repertoire to choose the song that best describes you. Compared to our last One Direction quiz, this one is a little different because there are no knowledge questions.

Currently, 1D’s adorable boy has roughly 22 solo songs. To determine your match, the Harry Styles quiz scans each of them. The possibilities are therefore endless—sort of. Since H will undoubtedly continue to release popular songs, we’ll also make an effort to keep the test current.

That being said, the crucial query is, “Which Harry song are you? But the quiz could do more for you than that. In order to create a distinctive manner of portraying your character, our editors hand-selected some of his most memorable quotes.

You will know which parts of Harry Styles songs best describe your personality by the end of the exam. Never before has this been attempted. You may therefore be among the first listeners to be familiar with both your song’s title and lyrics.

Have a Harry Styles quote sum you up

Hazza is a really smart person. He appears to be fairly wise and seasoned despite his youth. We wanted to include his profound words in the quiz since they include such significant topics as love, work, education, and life. As a result, the results include a bonus area where you may find out which of his famous statements best characterizes you.

We have bigger plans than just making a fun Harry Styles quiz. In order to create extensive character breakdowns in the findings, our editors used our Enneagram Test and other personality tests. By the time the exam is over, you will understand why and what it means when you match a particular Hazza song.

However, can a song reveal your personality?

It might seem silly to ask someone, “Which Harry Styles song are you? ” has no logical purpose. However, study has established that the music you listen to might reflect your personality. “Personality variables are associated to both love for the musical styles and participants’ motivations for listening to this music,” claims a 2010 study by Adrian C. North.

According to VeryWellMind, “North’s research highlights the association that people frequently draw between who they are as individuals and their musical preferences.”

So it’s possible to identify which Harry Styles song you are. And even a scientific interpretation of the findings is possible.

A preview of the results can be seen here. The following songs are just a few of the 20+ outcomes that are possible.

Harry’s summertime hit is full of joy and energy. You are a social and outgoing person if Watermelon Sugar is your song.

H says, “Just stop your tears,” displaying his upbeat and optimistic side. It represents the times. We must depart from this area.

Please take note that the results are not fully represented in the examples above. Please complete the questionnaire and provide answers to all 20 questions for a thorough analysis.

None of the pictures used in the Harry Styles quiz belong to QuizExpo. If you own any of these and would like for us to remove them, kindly get in touch with us.

For more personality quizzes check this: Which Fruits Basket Character Are You. 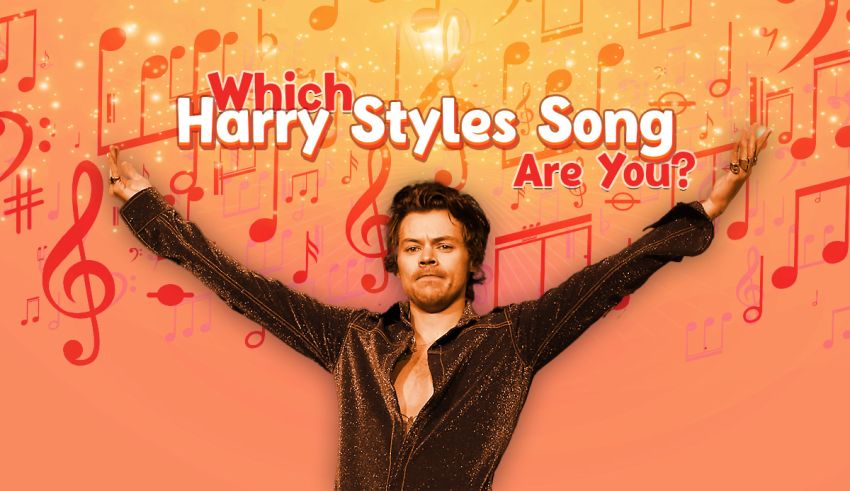